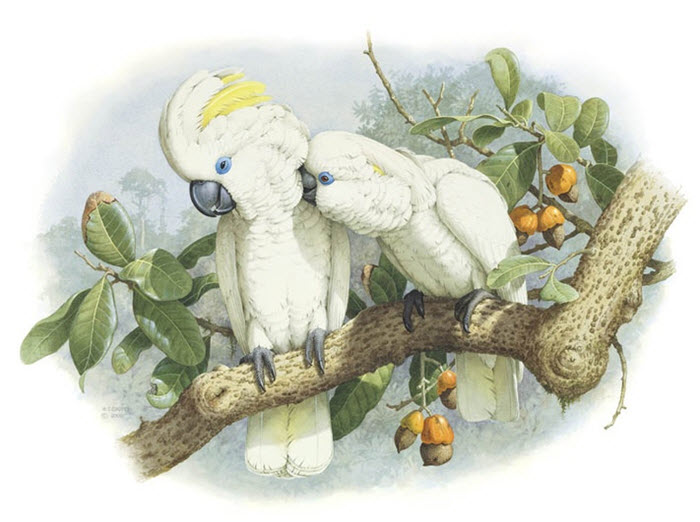 The blue-eyed cockatoo was given its name because of the ring of bright blue skin around its eyes. The scientific name is Cacatua ophthalmica.

They are found mainly in New Britain in the eastern part of Papua New Guinea. They prefer to live in lowland forests.

It is a rare bird both in the wild and in captivity.

The blue-eyed cockatoo has mostly white plumage, thus making the blue around its eyes even more pronounced. It has a large crest that curves backwards. When the crest is raised a few yellow feathers are revealed.

Their beaks are a dark black as are their legs.

They grow to twenty inches in length and weigh around eighteen ounces.

The only difference between the appearance of the male and female is that the female sometimes has a red iris while the male’s is brown. This is not always a true indicator of gender. Juveniles of each gender have dark eyes.

These birds have gray feet that are zygodactyls. This means the second and third toes are directed forward the first and forth point backwards. This allows them to hold and bring food to their beak while standing on the other foot.

They look similar to their relative the Sulphur-crested cockatoo.

These birds mainly inhabit forested areas. They usually make their nests high up in trees in the canopy area of the forest.

They tend to travel alone, in pairs or in small groups of ten to twenty birds as opposed to large flocks.

They forage in the morning and late afternoon. During the mid day they return to the canopy area of the forest.

The blue-eyed cockatoo has a loud, screeching call and is often heard before it’s seen.

The blue-eyed cockatoo eats a diet of seeds, berries, nuts, insect larvae and sometimes the coconut flowers and fruit.

This species of birds lives approximately forty to fifty years. They tend to live longer in the wild which may be due to not having optimal diet and care by owners.

Each clutch consists of an average of two eggs. Males and females take turns incubating the eggs which hatch in approximately twenty-nine to thirty days.

Both the male and female care for the chicks and provide food for them. Chicks leave the nest when they are around fifteen weeks old.

These birds mate for life and keep strong family connections.

The blue-eyed cockatoo is currently listed as vulnerable by the IUCN. The biggest threat is the clearing of the densely forested areas where they live.

Illegal trapping is another danger to these birds. Because they are so popular, but yet hard to find, they bring a high price.

The blue-eyed cockatoo is playful, enjoys socializing and being handled. They love to cuddle and spend time with their owners.

They can learn a few phrases if trained properly.

Like other cockatoos, the blue-eyed needs lot of attention. You will need to spend a few hours every day with your bird outside of its cage.

These birds have loud calls and will often screech for long periods of time when you’re not around. This means they are not ideal for apartment or condo dwellers.

When they don’t get enough attention they will quickly become loud, trouble makers or resort to self-mutilation such as plucking their feathers.

They will become destructive if they are not given enough chew toys to keep them entertained.

A Few things to consider before buying a blue-eyed cockatoo

The blue-eyed cockatoo is sought out as a pet due to its friendly nature and unique appearance. However, it is very rare which drives up the cost. It is not unusual to pay $10,000 or more to purchase this particular species.

Due to the extreme cost this bird is not recommended for first time bird owners.

The cost to buy the bird is only the beginning. There is then the cost of food, toys, a large cage or aviary, and the fees for an avian veterinarian. Be sure you have the resources to take care of a cockatoo before you invest in one.

Because they can live fifty years or more in captivity they are not a short-term commitment. Be sure you are willing to take on the on-going responsibility of caring for your bird.

One of the best ways to secure a cockatoo is through a bird rescue. Because cockatoos are high maintenance birds many owners choose not to keep the birds they purchase. This makes their population in rescues high.

Never purchase a bird that’s been caught in the wild. The bird was probably captured illegally and will not adapt well as a pet.