The little corella is native to Australia and southern New Guinea. It is also known as the short-billed cockatoo, the blood-stained corella, and the bare-eyed cockatoo.The scientific name is Cacatuas anguinea.

Their feathers are sometimes used for armbands and headbands in traditional ceremonies.

The little corella is a mid-sized cockatoo. As adults they are around fifteen inches long and weigh anywhere from twelve to twenty ounces.

It has white plumage with a little pink around the eyes and yellow under its wings. It also has some blotches of orange/red that contribute to its nickname “the blood-stained corella.” It has a small white crest.

The ring around its eye is blue and larger than on other cockatoos. It saggy eyes give it an almost comical appearance.

There is no visible difference between the male and female though the female is often a little smaller in size. DNA testing is required for sexing.

The long-billed corella is similar in appearance but is larger in size, has an orange band across its throat, and has a longer beak.

The little corella feeds mainly in grasslands. They do not live in heavily forested areas like many other cockatoos. 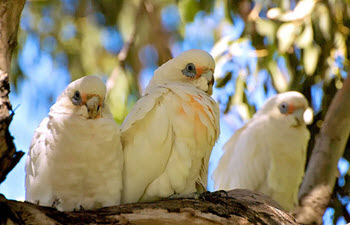 They are considered pests by farmers since large flocks can completely destroy a crop. They have also been known to forage for food where farmers store their grain.

They fly in large flocks that often include other species of birds such as galahs, red-tailed black cockatoos, and sulfur-crested cockatoos. They’ll fly many miles a day to find food and water.

In some urban areas, such as Brisbane and Sydney, flocks can be seen feeding in parks and playing fields.

Their screech is very loud. When large flocks are flying they often all screech at one time and can be heard for miles.

They are known for their playful actions which include hanging upside down and sliding down sloping rooftops. They have even been seen swing round and round on windmills. When they lose their grip and fall off, they immediately return for another ride.

The little corella feeds on many types of seeds found in the wild. They usually feed on the ground. They also eat corn, wheat and barley crops making them a pest to farmers.

The little corella can live for over forty years with the right diet and a healthy environment.

Breeding time for these birds is from May to October usually during periods of long rain. They build nests in the hollows of a tree or a cavity in rock and line it with wood shavings.

Both the male and female incubate the eggs and then care for the chicks.

They mate for life and often return to the same tree year after year.

The little corella is one of the most abundant in the wild in Australia so is not currently on any endangered lists.

Unlike many other exotic birds, development has actually helped increase its numbers. It now has easier access to water thanks to man-made wells and food due to farmland.

The little corella is a popular pet in Australia. This is partly because of its easy availability. Another reason is that they are easy to tame and enjoy interaction with humans.

They are extremely intelligent birds and considered one of the best talkers of the cockatoos.

These birds, like many cockatoos, are noisy and are best suited in single family homes as opposed to apartments or condos with nearby neighbors.

They can bite and become aggressive, especially the adult males.

The little corella is known as an escape artist. You’ll need a heavy wire cage to keep them secure. Some owners find they need to padlock cages and windows.

They are best fed a diet of pellets designed for their breed along with an assortment of fruits, seeds, and veggies. If your bird appears hyper cut down on the amount of fruit.

Never feed your bird avocado or chocolate, both of which are toxic to all cockatoos and parrots.

A Few things to consider before buying a little corella

If you don’t live in Australia it will be harder to purchase one of these birds and a lot more expensive.

Like other cockatoos, the little corella is socialable and needs lots of attention. Unless you have at least two hours to spend with your bird, outside of its cage each day, this is probably not a good pet for you. Its best to only spend as much time with them when they’re young as you’ll be able to as adults.

Little corellas love to play so they’ll need an assortment of toys.

These birds can live forty years or more so they are a long-term commitment.

Like other cockatoos their feathers produce down making them a bad pet choice for families with anyone who suffers from asthma or allergies.