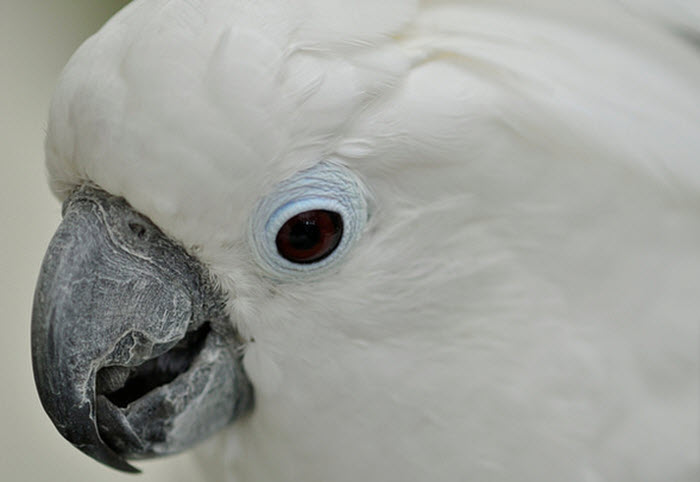 The umbrella cockatoo (Cacatua alba) is also commonly known as the great white cockatoo. Both names for this bird are based off its appearance.

The umbrella cockatoo has a complex set of feathers on its head that can expand into an open crest. It is not uncommon for them to unfold this crest in a display when they are surprised, upset or trying to look dominant. The pattern of the crest looks something like an umbrella, thus the name “umbrella cockatoo.”

Cockatoos tend to be large for a domestic bird. The white cockatoo is about 18 inches long.

Eyes are dark brown in males and reddish for females.

German zoologist Philip Ludwig Statius Miller is given credit for first describing the umbrella cockatoo in 1776.

It was at this time they were given the name “cacatua alba,” alba being derived from the Latin word for “white.”

In this past, umbrella cockatoos were sometimes referred to as “white parrots.” We now know that this is inaccurate, as while cockatoos make up a family of parrots (Cocatuidae), they are not “true” parrots. There are 21 species belonging to the family Cocatuidae. 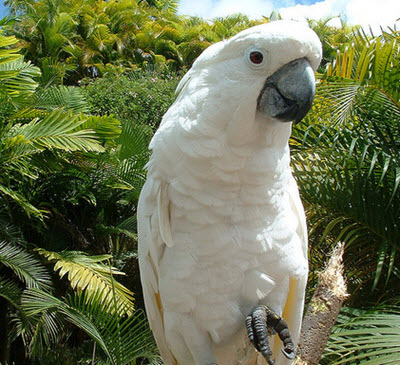 Umbrella cockatoos are tropical birds. They are endemic to a series of islands such as Bacan, Ternate, Halmahera, Tidore and Kasiruta.

At one time, their population was believed to be quite stable and healthy. Recent studies have shown this not to be the case, however.

Unfortunately, the umbrella cockatoo is now an endangered species. Human interaction such as cultivating them as pets has occurred too rapidly. Studies have shown a massive drop in the wild cockatoo population. Special care will have to be afforded to the umbrella cockatoo and their natural habitat if they are going to survive.

Cockatoos are very popular as pets. The umbrella cockatoo is often desired as a pet for its beautiful white plumage and the interesting crest of feathers on its head. The bird is certainly an interesting thing to behold.

While some species of cockatoo are endangered, the umbrella cockatoo included; they are still legal to own as pets. Capturing wild cockatoo from their environment for sale is now illegal and only occurs within the black market, but the sale and ownership of cockatoo that are already owned and bred in captivity is fine.

In addition to its beautiful appearance, the umbrella cockatoo is often desired as a pet for its agreeable personality. Like most birds, it can be a handful at times; sometimes having outbursts or temper tantrums. But the display the cockatoo makes with its wings and feathers even when having a fit can be an amusing thing to watch.

Overall, the umbrella cockatoo is an affectionate and social pet. They form a special bond with their owners and enjoy playing and being close to the one who cares for them. A particularly interesting trait of note is that umbrella cockatoo like to cuddle. Once they form a bond with their owner, they will often snuggle up to the human in a display of affection. This is exceptionally rare in the bird kingdom. Even parrots who are closely related to the cockatoo are not known to cuddle like this.

Like parrots, cockatoos are able to “speak” by way of mimicking sounds they hear. Many owners successfully teach their cockatoos a series of words and sound to associate correctly with certain scenarios. They are not as adept at learning to speak as are parrots and some species of cockatoos learn words better than others.

Their call can be extremely loud and takes a little getting used to for some owners. When alarmed they will often hiss.

As sweet as the umbrella cockatoo can be as a young bird, it can become demanding if not trained properly. It requires a lot of time to care for one of these birds correctly. Be sure you’re willing to spend the time and money training your bird. The do not do well if they are ignored for long periods of time during the day.

Reputable breeders are usually the best place to purchase a bird. Look over the surroundings the bird was raised in and get as much information as you can about its current schedule and diet.

Adopting a rescue bird is another good option. But be aware the bird may not have been cared for or trained properly when it was young. If that is the case, it will require a lot of love and patience on your part to become an enjoyable pet.

It is usually best not to bring a cockatoo of any species into a home with a cat or dog. Birds are considered prey to them. Small children are also not a good mix with a cockatoo. They will want to put their fingers through cage walls or try to pick the bird up. A cockatoo’s powerful beak can create a dangerous bite. Keeping the bird isolated in another room is not a good long-term solution because they are social animals and will want to be near the family.

The exact lifespan of a cockatoo is something of a debate. No truly reliable study has been done yet, so there is still a degree of uncertainty involved. However, there have been many claims citing cockatoos as living over 60 years when kept in captivity. Whether or not this is an “average” or just a handful of lucky specimens is unknown, but suffice to say; the cockatoo has quite a long lifespan.

Like many animals, the cockatoo tends to survive longer in captivity due to access to medicine, clean food and no predators. While the numbers are still being figured out; it is believed the wild cockatoo may live up to ten years less in the wild when compared to those who live in captivity.