The yellow-tailed black cockatoo is sometimes called the yellow-eared cockatoo because of the circle of yellow feathers on the side of its head. They are found in southern Australia. The scientific name is Calyptorhynchus funereus.

It is one of the six species of black cockatoo native to Australia.

They are a well-loved species and usually fly low enough to be seen, flapping their wings in a slow fluid motion. Their loud call is often heard before they are seen. 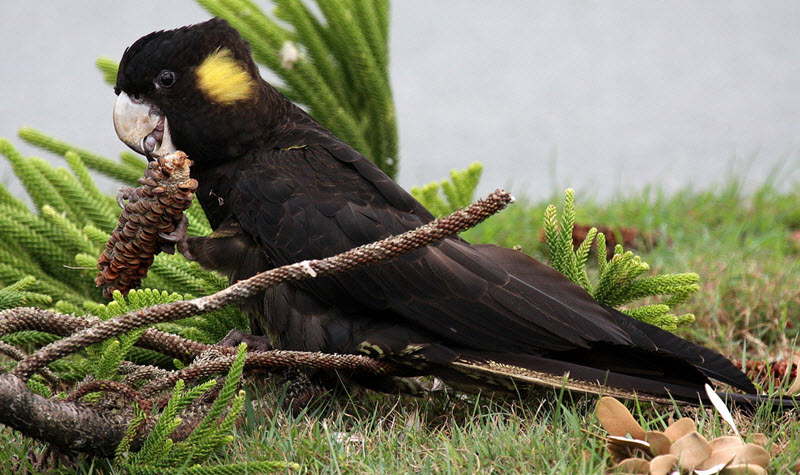 The yellow-tailed black cockatoo has mostly black feathers. However, it does have some yellow on its tail and a patch of yellow on its cheeks. The yellow cheek patch is larger on the female.

Males have a pink eye ring but the female’s eye ring is gray.

These are one of the larger cockatoos. As adults they are around twenty-two inches long and weigh from one and a half to two pounds.

The yellow-tailed black cockatoos live in grasslands, forests and pine plantations. They are sometimes seen in urban areas such as Sydney and Melbourne.

They have a long drawn out call but when alarmed they will screech. 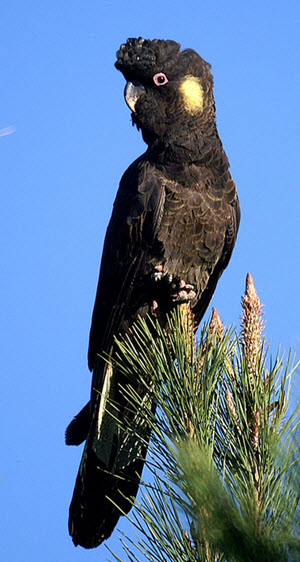 These birds eat a wide variety of foods which helps them survive when their natural habitat changes. They eat mostly seeds from trees such as she-oaks and eucalyptus trees. They’ll also eat a few insects and insect larvae.

The hold pine-cones with one claw while picking it apart with their beak. They will spend up to thirty minutes eating each cone.

They eat mostly in trees but will sometimes forage ground plants. The can cause damage to trees by peeling off the bark to find the insect larvae.

They drink water in the morning and evening wherever they can find it including puddles and troughs.

In optimal conditions these birds can live up to fifty years but average life span is usually twenty-five years.

These birds reach maturity at the age of three or four.

The male yellow-tailed black cockatoo approaches the female and attracts her attention by puffing up his crest and spreading his tail feathers exposing the yellow plumage underneath. His eye ring turns a deeper color, he growls, and then bows to her three or four times.

They build their nests in the hollows of trees, usually the eucalyptus tree, and they line the nest with wood chips. This cockatoo usually chooses isolated trees instead of trees in dense forests.

The mother incubates the eggs and the male brings her food. The first egg hatches after twenty-nine to thirty days and the second, smaller egg, seven days later. Though there are often two eggs in a clutch usually the second chick is neglected and does not survive.

The chicks leave the nest after three months but remain with their parents until the next nesting season.

They often return to the same tree to breed the next year.

The biggest threat to the yellow-tailed black cockatoo is loss of its natural habitat. Forests and woodlands are quickly being cleared for expanding development. This decreases where the cockatoo can make nests and find food.

There is now concern about these birds due to their rapid decline in numbers over the last two decades. Efforts are being made to prevent any illegal trade and to protect their natural habitats. 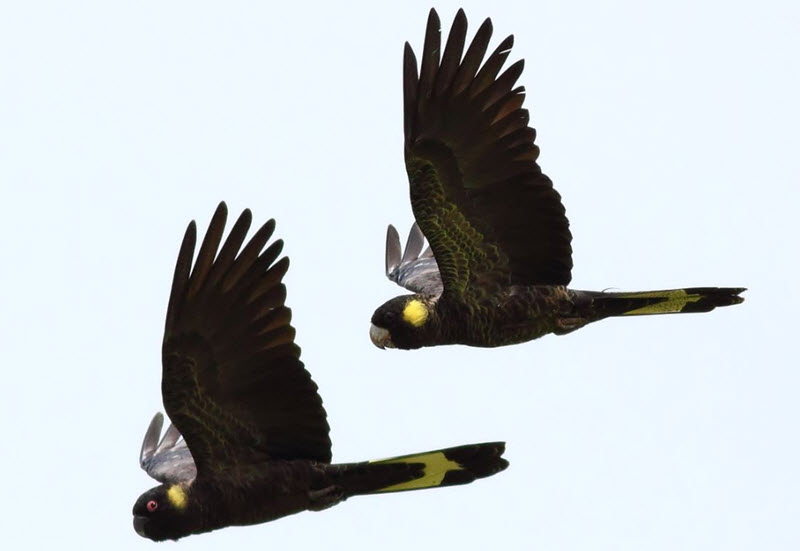 The yellow-tailed black cockatoo is considered a high maintenance bird and does not make the best pet. They were rarely even held in captivity until the 1950s.

Because life in captivity seems to stress them they are prone to behavior problems with include plucking out their feathers and consistent screeching.

Their large size also makes it difficult to keep these birds as pets. They require a very large cage or preferably an aviary.

They are not often available outside of Australia.

Any yellow-tailed black cockatoo that is still of breeding age and in good health should be in a sanctuary or program where they have a good chance of success with breeding these birds.

However, you may be able to purchase a yellow-tailed black cockatoo that is not suitable for breeding. You’ll need to heed the warnings given above and be prepared for the challenge.

Get your home ready in advance with a large cage or aviary.

Make sure you have plenty of toys to entertain your bird and for them to chew on.

Be prepared to spend at least two hours every day working with and training your cockatoo.

Beside the cost of the bird you’ll have the expense of a proper diet which for this bird requires protein, as well as seeds, pellets, and fresh fruits and veggies.

These birds can live up to fifty years so they require a long-term commitment from their owners.