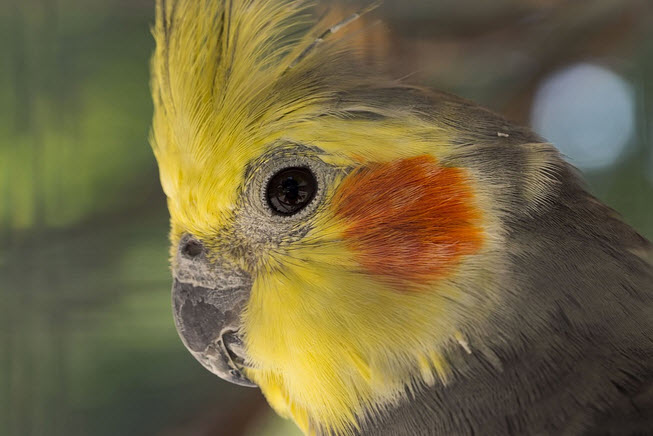 The cockatiel is native to Australia and also go by the names weiro and quarrion. Its scientific name is Nymphicus hollandicus.

The cockatiel has adapted to many areas of Australia but tends to be found in arid areas and grasslands mostly inland.

The cockatiel is only twelve or thirteen inches in length and weighs around 3.2 ounces. This makes it the smallest of the cockatoo family.

It’s mostly grey in color with some patches of white. Yellow patches are noticeable around the face of the male. Both male and female have spots of orange close to the ears but they are brighter on the male.

They have long tail feathers, usually as long as their body length.

Their most distinctive feature is their crest which stands erect based on the bird’s emotional state. When excited or startled the crest will be vertical. When the bird is calm the crest is lowered. When angry the crest is flattened close to the head. 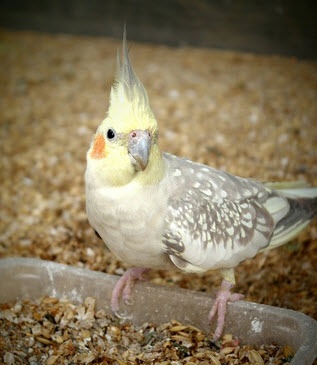 They can cause great harm to agricultural fields and are therefore considered pests by farmers.

Cockatiels are ground feeders who eat mostly seeds including sunflower seeds and sorghum. They also eat charcoal which it’s suspected helps to detoxify others parts of their diet.

The average life span is fifteen years but with the proper care and nutrition they can live up to twenty-five to thirty years in captivity.

Breeding season is during the spring in Australia, between the months of August and December. They usually lay four to six eggs. Incubation takes around twenty days before eggs are hatched.

The chicks stay in the nest for five weeks.

Cockatiels still have large numbers and are not on any endangered lists.

Domesticated cats can be a danger as well as larger species of birds.

Cockatiels are one of the most popular birds to keep as a pet. They are sociable and friendly and love to interact with their owners. They are second only to the budgerigar in popularity of caged pet birds.

They can be taught to mimic sounds and repeat a few words but not to the extent of parrots.

If you’re wanting to breed birds then cockatiels are considered one of the easiest with a high rate of success.

You’ll need to furnish a diet that contains a variety of foods such as fresh veggies and fruit that are chopped into small bites. Be sure to take out any seeds in the fruit. Cherry pits, for instance, can be toxic for your bird. Veggies such as sweet potatoes and yams seem to be preferred cooked.

Your cockatiel can eat protein such as chicken, beef or eggs but only in small amounts.

Cockatiels in the wild eat mostly seeds but they also get more exercise so a high fat diet is not a problem as it can be for birds in captivity. Because of this it’s important to provide your bird with a wide variety of seeds as well as pellets designed especially for them.

Be sure seed containers are cleaned out often to prevent any fungus from growing on them.

Your cockatiel should always have access to fresh water. Dispensers should be cleaned daily.

Foods that are toxic to your cockatiel include: chocolate, avocadoes, beans, honey, garlic, or any type of sugar substitute.

A Few things to consider before buying a cockatiel

Like all cockatoos the cockatiel is a friendly, affectionate pet but they need lots of attention. Unless you have at least two hours a day to spend with your bird, outside its cage, this is probably not the best pet for you. Without the proper attention they may become depressed and act out in various ways. This includes pulling out their feathers, banging their head against their cage wall, become agitated and destructive, and refusing to eat. They need attention!

Cockatiels can be loud but are much quieter than many other cockatoos which is part of why they are popular as pets.

If you want your bird to become attached to you it’s best to only have one bird. If you put two cockatiels in a cage they won’t bond as well with their human.

Like many birds, the cockatiel is not a good pet for a home with small children. Sudden movements will startle them. Older children may enjoy learning to care for a cockatiel.

Remember, the fumes from a pan with Teflon coating can kill your cockatiel so never keep your bird’s cage in the kitchen!

Also, drafts are very bad for a cockatiel so keep the cage away from doors and vents.

Always take your cockatiel to an avian vet for an annual checkup.