A black cockatoo event have nothing to do with cockatoos but since i received this question from two different people in the span of a couple of days i decided to write a page about it. The phrase a black cockatoo event is relatively new as far as i have been able to determine and there is very little information about the phrase online. 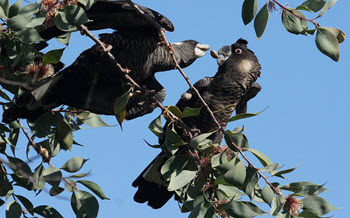 The phrase is used by day traders and other traders who trade exotic financial instruments. It is an variation of the common and well known term “black swan events”. A black swan events refer to an event that is not supposed to be able to happen but that do happen. High-profile, hard-to-predict, and rare events that are beyond the realm of normal expectations . The phrase is derived from the fact that Europeans for a long time didn’t think there were any black swans. It was an impossibility. But then we discovered that there is in fact black swans and the impossible became possible.

A black swan event is an event that no one or very few saw coming. Black swan events in the finance world is a lot more common that most people think and there are investment funds that make their money exclusively betting that different black swan events will take place.

An example of a black swan event is when the Enron stock plummeted from US$90.75 in 2000 to less then US$1 in 2001. No one expected the scandal nor that the stock would become worthless.

Cockatoos are exotic birds and a black cockatoo event is a tongue in cheek way to refer to a black swan event that effects exotic financial instruments such as futures, options, crypto currencies, CFD certificates etc. The term is not very well known and is hardly ever used outside of day trading community where the term is sometimes used jokingly. I doubt the term will get wider use but you never know.

I want to extend a special thanks to www.daytrading.com that helped me answer this question and that helped provide examples of black swan events in the finance industry.