The salmon crested cockatoo is also called the rose-crested cockatoo or the Moluccan Cockatoo. It is found in the south Moluccas in eastern Indonesia. The scientific name is Cacatua moluccensis. 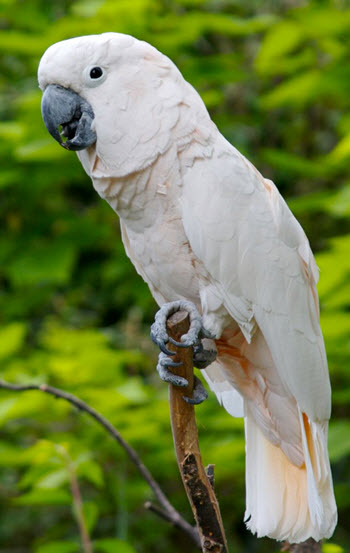 The Salmon crested cockatoo is considered the largest of the white cockatoos. It is around twenty inches long and weighs close to two pounds. The female is slightly larger than the male.

It has a slight pink tint to its overall plumage. Its crest and under its wings is tinged with a darker more prominent pink coloring.

It has the distinctive crest that cockatoos are known for. It raises its crest to attract a mate or when it’s alarmed or frustrated. You should never approach a cockatoo when its crest is raised. When the crest is lowered, the bird is relaxed and calm.

The eyes of the male are dark brown but the females have a reddish tint.

Like other cockatoos the salmon crested has a loud screeching call. They are often heard before they are seen.

This bird eats a diet consisting of seeds, nuts, fruits and even large insects. Its powerful beak can use 500 pound of force so it can crack any type of nut including coconuts.

They will also feed off farm grains such as corn and can destroy an entire crop. Because of this they are considered a pest by farmers.

These birds can live over thirty years in captivity with the proper diet and care.

The salmon crested cockatoo breeds only once a year, usually between December and March. The male bird will present itself to the female and raise its crest to get attention.

They nest in the cavities of trees and usually lay only one or two eggs. When two eggs are hatched often only one chick survives.

They fledge after four months. They will not breed until they are four years old.

They mate for life and will feel stress if separated from their mate.

Loss of habitat has contributed to the decrease in numbers of the salmon crested cockatoo. They are now on the protected species list and considered vulnerable.

Illegal poaching of these birds has been another threat. At one time, it was estimated that 6,000 salmon crested cockatoos were being illegally removed from the wild each year. Due to this, strict requirements and licensing is required for traders.

These pets are affectionate and smart and can be trained to mimic and due a variety of tricks. 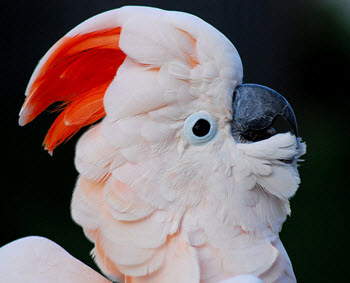 However, their fierce connection to one owner can make them harmful to other family members. Consistent proper training can help deal with this problem.

You must have a lot of time to dedicate to this bird. People who work full-time often have a hard time giving these birds the attention they need. They must be out of their cages and with their owners at least three or four hours each day.

Because of this neediness, they are not recommended for anyone but experience bird owners. They will become aggressive and pluck their own feathers if they don’t receive the proper attention and care. They are considered one of the most demanding pets to own.

Like most cockatoos, the salmon crested is a noisy bird with a loud screeching call. They are not suited to apartment dwellers.

It’s important that this bird is not held and cuddled so much when it’s young that it cannot entertain itself at least some of the time on its own. Otherwise, it will only be content when it’s with its owner which is not possible all hours of the day.

These birds need to be challenged or they become bored and destructive.

A Few things to consider before buying a Salmon Crested Cockatoo

It may be hard to find one of these birds for purchase since they are now under protected status. If you do find one available, the cost is usually over $2,000. It is illegal to import them into the United States but some are being breed in captivity.

The initial purchase is only the beginning, though. These birds need a large, well-made cage or aviary.

They need a diet of pellets, as well as fresh fruits and veggies. Some of these birds have tested for anemia if not fed enough protein. As with all parrots, they cannot eat avocadoes or the pits or seeds of fruit as these are toxic to them.

You will need to take the bird to an avian vet for an annual check-up as well as when the bird is sick.

Before purchasing any type of cockatoo considered adopting a bird from a rescue organization. Many cockatoo owners find they do not have the time or energy to devote to this type of pet so the birds are turned over to the rescue.