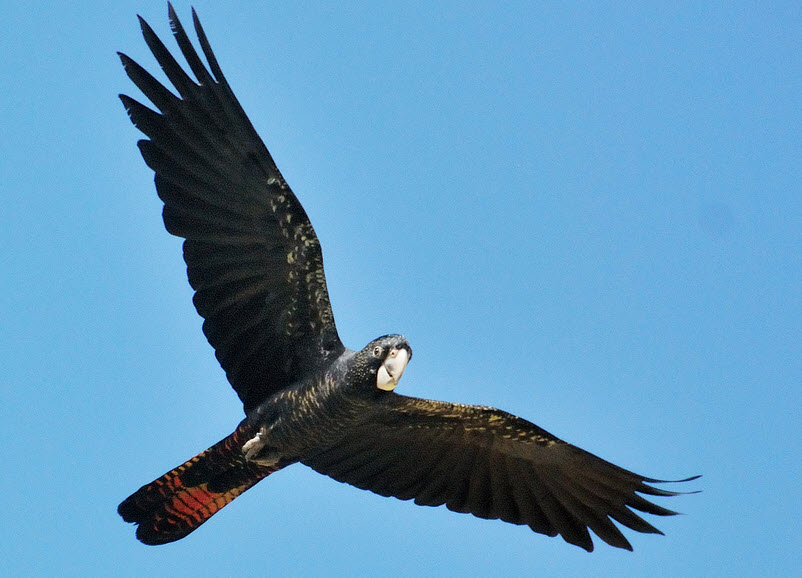 The scientific name for the glossy black cockatoo is Calyptorhynchus lathami. They are found in Australia; mostly in the eastern and south eastern region of the country.

They are the smallest of the black cockatoos.

Unlike some of the other cockatoos, the glossy black has a small crest. Their bill is large and powerful and they use it to crack open seeds.

Young birds look similar to the female. Sexing of the birds by their plumage is usually not accurate until the birds are three years old.

They are approximately nineteen inches long as adults and weight twenty-six ounces.

The black glossy is known for its calmness, even when approached while eating.

They don’t like to fly so they usually don’t fly long distances. 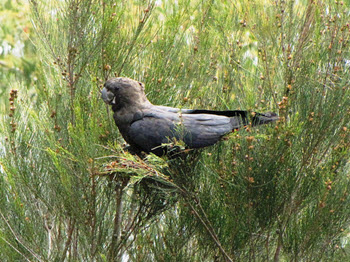 The glossy black cockatoo eats a diet consisting mainly of seeds; primarily seeds from the casuarina tree. They use their large beak to break open the cones and get to the seeds. They often return to the same tree over and over even when there are other trees, loaded with cones, nearby. When that tree is empty of cones they’ll move on to another tree.

When eating the seeds they always hold them in their left claw.

Though casuarinas seeds are their primary food source they will also eat seeds from the eucalyptus, hakeas, and acacias trees as well as insect larvae.

They spend almost 90% of their time foraging for food sources.

They have been known to live longer than thirty years.

The glossy black cockatoo breed between March and August and usually produce only one white egg every two years. They build nests in hollows in eucalyptus trees and line the nest with leaves and other debris such as wood chips. They’ll nest in living or dead trees usually high off the ground.

After 30 days the egg hatches. The chick will usually stay with its parents for a year.

These birds mate for life.

The worst danger is their loss of habitat due to development. The loss of eucalyptus trees to make their nests and casuarinas trees for them to eat from, leave them in a perilous situation. Casuarinas trees are often sensitive to extreme heat and rarely survive bush fires.

The most common predator of the glossy black cockatoo is humans who sell them by illegal trading.

They are an endangered species due to losing so much of their natural habitat and are considered one of the most threatened species in Australia.

Because they breed slowly it’s hard for them to increase their numbers one they’ve been depleted. Due to their endangered status there are sanctuaries and conservatories who work to monitor the population and try to create environments for them to breed.

The glossy black cockatoo is quieter than many other types of cockatoos which can be an advantage for pet owners.

Like other birds they can be messy so take that into consideration.

They have a very restricted diet. You’ll need to be willing to freeze the cones of the she-oak tree (casuarina tree) to feed your pet. They’ll break open the cones to get to the seeds inside.

Because they are so endangered, only breeders who are experienced should consider trying to breed and raise the black glossy cockatoo.

If possible, have any bird you’re thinking of buying examined by an avian vet before making the final purchase.

A Few things to consider before buying a Glossy Black Cockatoo

Do you have enough space for this type of bird? They will need to get some exercise. An aviary is a better option than a cage. If they are caged they will need to let out of their cage for several hours each day.

Do you have the money to invest in an avian vet? Is there one in your area? How far will you need to travel if your cockatoo needs care?

Does your condo or apartment complex allow exotic pets? Will your neighbors be bothered by the noise?

Do you have the time to commit to caring for and socializing with your cockatoo?

Who will take care of your bird when you’re on vacation?

Do you have the budget to invest in the bird, the equipment needed, the food, and the vet bills?

If you decide to purchase a glossy black cockatoo be sure you’re buying from a reputable and legal dealer. Do to their endangered classification illegal trade has been a big problem. Always check the laws in your area before making a purchase of any exotic bird or animal.