The red-vented cockatoo is also known as the Philippine cockatoo or the kalagay. The scientific name is cacatua haematuropygia.

They are native to the Philippines. 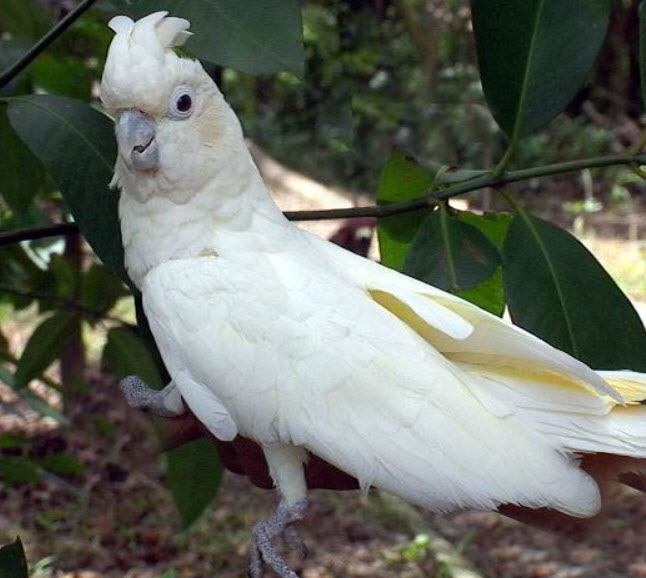 These birds are mostly white in plumage except for the distinctive orange and yellow feathers around their vent, thus the reason for their name. They have a bare ring around their eyes.

They have a small crest that they raise when they are alarmed or excited.

Adults birds are around twelve inches long. They are similar in size to the Goffin Cockatoo but it’s easy to distinguish between the two because of the red orange feathers of the red-vented.

Males have dark brown eyes while the females are reddish. Their beaks are a grayish white color.

These birds are very social and usually travel in large groups. The have an extremely loud screech which is nearly deafening when they are in a large flock.

They live in forested areas.

Because of their bright plumage they are easily noticed by both human and animal predators. They are agile flyers that can perform swift acrobatics to avoid the raptors that attempt to attack them.

Though their main diet consists of seeds, they will also eat fruit, flowers and nectar.

Because they are also known to eat rice and corn crops they are considered pests by farmers.

It is estimated these birds usually live only seventeen to twenty years though this may be underestimated.

Mating season is from March to July and pairs live apart from the flock during this time.

Nests are made on the limbs of trees instead of in cavities of trees as with most cockatoos.

Though the birds begin breeding at the age of four, they usually do not lay eggs until they are seven years old.

Two to three eggs are laid in a clutch and incubation is twenty-eight days before the eggs hatch. The chick remain in the next for nine to ten weeks after hatching.

Their slow breeding time makes it hard for their numbers to increase now that they are so greatly diminished.

The red-vented cockatoo is considered highly endangered. They numbered as low as 1,000 in 2008. They are considered one of the fifty rarest birds in the world and the most endangered of any of the cockatoos.

Illegal poaching has contributed to the decreasing numbers of this species. Eggs are stolen from their nests to be sold after the birds are hatched.

Farmers have been known to shoot these birds due to their ability to destroy a crop of rice or corn.

An outbreak of Psittacine disease of beak and feathers has contributed to killing many of these birds.

They also suffer from destruction of areas to nest and forage for food. Efforts are being made by groups such as the Katala Foundation and Rainforest Rescue to preserve their natural habitat from further development.

Because of the scarcity of these birds they are not easy to find as pets and will be quite expensive if you do find one. Because of their endangered status trade is limited. Traders must

It’s considered best for the species if adult birds of mating age are kept in aviary organizations that have had success with breeding this species. Birds that are no longer of breeding age or have special needs can make good pets.

These birds are considered loud will not do well in apartments or condos where they will disturb the neighbors. They are best raised in single family homes or aviaries.

If you do purchase one make sure it’s from a reputable dealer and not someone who illegally captures birds in the wild. A wild bird will not adapt well as a pet.

A Few things to consider before buying a red-vented cockatoo

As with all cockatoos, the red-vented bird can be affectionate and loving but it needs a lot of attention from its owner. You must have a few hours each day to socialize with the bird outside of its cage. It will become destructive without attention and resort to feather plucking as well as destroying anything in your home.

The cost of raising one of these birds can be high. Purchasing the bird is only the beginning. You then need to provide a large cage, lot of toys for chewing and for entertainment, a diet consisting of pellets as well as fresh fruits and veggies, and visits to an avian vet.

As with all cockatoos, before buying one you should visit a bird rescue organization. Because of the attention these types of birds require many owners are not successful in keeping them and turn them over to rescues. You may be able to adopt a bird that’s perfect for your family at a lower cost than from a pet supplier.