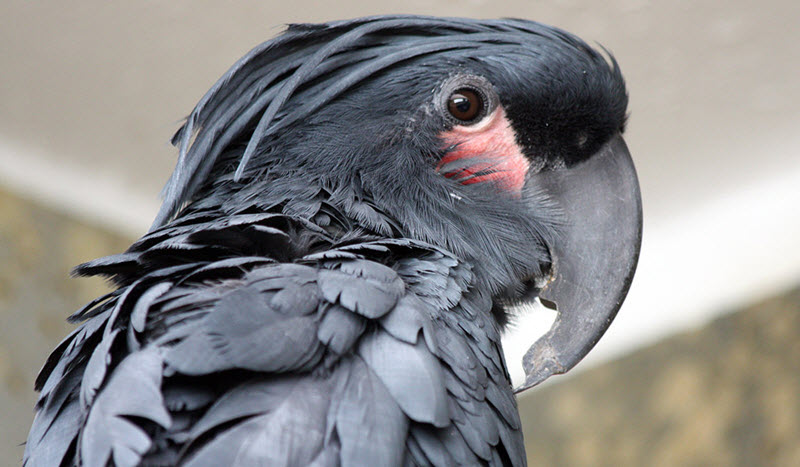 The Palm Cockatoo is also known as the great black cockatoo and the goliath cockatoo. The scientific name is Probosciger aterrimus which in Latin means “black with a long thin nose”.

They are native to north Queensland in Australia though some can be found in New Guinea and Indonesia. 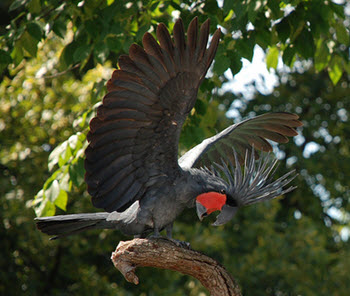 The palm cockatoo has a large black beak and patches of red on its cheeks. The red will become more apparent when the male is threatened.

Its plumage is mostly black but can also be a dark gray.

When full grown they are around twenty-three inches long and weigh about two and a half pounds. It is one of the largest cockatoo species in Australia; the only rivals being the yellow-tailed black cockatoo and the sulphur-crested cockatoo which are equal in size.

It has a large crest and one of the largest beaks of any cockatoo. The beak of the male is larger than the female.

The palm cockatoo makes a variety of calls; some of which sound like human syllables.

One unique behavior of this bird is that the male will take a stick and use it as a drum on a tree before nesting in the tree. The reason for this is still unknown. One reason for the drumming could be to mark the territory and thus discourage other birds from attempting to nest in that tree. Another theory is that the female listens for the sound of the drumming on the tree and thus decides if the tree is suitable for nesting. This makes the palm cockatoo one of the few birds known to use tools.

The male then breaks the stick apart and uses it as nesting material.

They do not travel in flocks. Usually only two to six are seen feeding together.

The large beak of the palm cockatoo is used to break open many types of nuts and seeds.

The oldest confirmed age of a Palm Cockatoo in a zoo is fifty-six though stories are told of one living to a much older age of eighty. It is unknown exactly how long they live in the wild but it’s estimated to be an average of forty years. 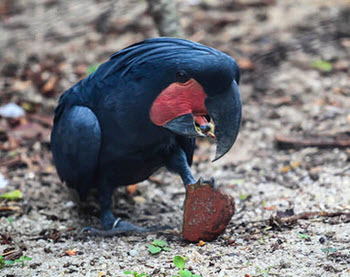 The Palm cockatoo is unique in that it is the only cockatoo that it uses branches to build a platform in its nest.

These birds lay only one egg every two years which means their numbers increase very slowly.

Parents care for chicks for many months after they hatch.

The palm cockatoo mates for life.

Their breeding success is considered very low but is somewhat offset by their long life span.

Loss of habitat is a growing concern for the Palm Cockatoo as well as many other cockatoos. They need hollow trees for nesting. These are often cleared for development or destroyed by fires. It takes many years for these types of woodlands to develop even when conservation efforts are in place.

These birds are also hunted for sport.

Illegal poaching is also a problem.

On the IUCN Red List of Threatened Species the Palm Cockatoo is shown on the Least Concern category.

Due to its unique appearance the Palm cockatoo is popular as a pet. It is also considered to be one of the best talkers of the cockatoos.

Like most cockatoos they will need space to fly. They need to be out of their cage for at least two hours a day. They can’t be kept alone for over eight hours a day.

Their diet is rather specific and can be costly.

A Few things to consider before buying a Palm Cockatoo

Taking care of an exotic pet requires much thought and preparation.

You need to be sure your condo or apartment allows exotic pets. If so, will the noise of a cockatoo annoy your neighbors?

Because they are rare, these birds can be expensive to purchase. Cost is often $15,000 and up.

But the initial cost is only the beginning. You’ll need to provide a healthy diet, toys, a large cage or aviary, and visits to an avian veterinarian.

These birds do not breed well in captivity.

When purchasing an exotic bird make sure you are buying from a dealer who acquired the bird legally. A captured, wild bird will not make a good pet.

Consider adopting a cockatoo from a rescue organization. Many people buy these birds and then realize they don’t have the resources or time to care for them. These birds often end up in rescues waiting for adoption by a new owner.