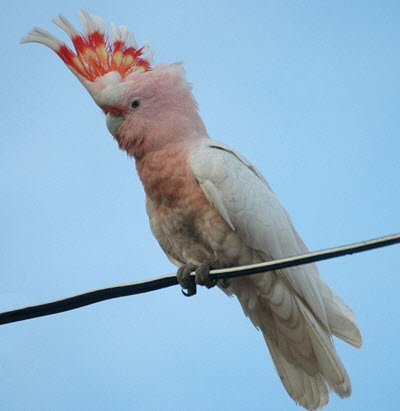 This bird gets the interesting name “Major Mitchell’s” cockatoo from a famous quote; “Few birds more enliven the monotonous hues of the Australian forest than this beautiful species whose pink-colored wings and flowing crest might have embellished the air of a more voluptuous region.”

The quote came from, as one might guess; a man by the name of Major Mitchell. Major Sir Thomas Mitchell, to be precise.

The term desert cockatoo refers to the fact they often live in the arid areas of Australia, which is their native country. They tend to stay away from the humid coastal areas.

As their other name, the “pink cockatoo” would suggest; these birds have a brilliant pink plumage which is what caught the eye of Major Mitchell. While everyone has their own preference, the beautiful pink plumage has made this bird a fan favorite among many cockatoo owners.

Most birds of this species are around thirteen to fifteen inches long and weigh twelve to fifteen ounces.

The Major Mitchell cockatoo is quite nomadic in nature. They will travel great distance to find food and rarely stay in one place for long.

In the wild, they often travel in small flocks, usually less than fifty. And sometimes only in pairs.

They are ground feeders and become quite aggressive if bothered while feeding.

The breeding time for the Major Mitchell species is often between July and January. A cavity in a large tree is used for breeding and nesting. They often nest up high in

Two or three eggs are usually laid in each clutch. Both parents share the chores of preparing the nest, protecting the eggs during incubation and caring for the young birds after they are hatched. Incubation usually requires twenty-five days.

They take flight as early as seven or eight weeks but are still fed by their parents for another eight weeks.

This species of cockatoo is quite territorial over its breeding area and when not allow others to nest nearby.

As with other cockatoos, Major Mitchell’s cockatoos enjoy a long life span, often over fifty years. They tend to survive up to ten years longer in captivity if they receive a proper diet and medical care. Some are on record as living over seventy-five years in captivity.

Because of their beautiful appearance they are popular as pets. They are also extremely intelligent birds.

But in general, they are not recommended for those who are not experience bird owners. Because they bond closely with one owner they are often referred to as “one person birds”. This means they are usually not the best choice for families with young children. They will often become aggressive towards someone other than their primary owner, especially if the owner is nearby. Because of this aggression, they are not considered one of the better choices of cockatoos as a pet. 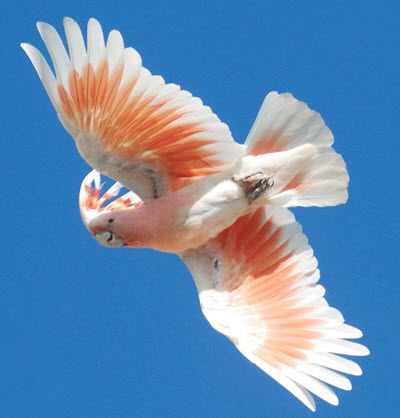 Major Mitchell cockatoos can rarely be taught to speak. Their calls are loud, high noted with a slight quiver. Their call of alarm is rather harsh. Because of their noise level, they are not the best option for those living in apartments.

As with other cockatoos, these birds need owners who have a large amount of time to train and entertain. Major Mitchell cockatoos need a lot of exercise to stay healthy so they need at least three or four hours of exercise outside of their cage on a daily basis. An aviary is best so they can have room to fly but be safely away from dangers such as open windows or doors.

They also require a large cage that they can more around in comfortably. The cage needs to be made of strong gauge wire or the birds can chew their way out.

Cockatoos are extremely sensitive to smells so their cage should not be kept in a kitchen where they are a lot of fumes and scents. They also do not fare well in the homes of smokers.

They are extensive wood chewers so they must be provided with many toys and wood chips to chew on. Otherwise household objects become their chew toys leaving their owners upset and angry.

If not given enough attention they will suffer emotionally and often turn to destructive behavior.

Remember, these birds have a long life span so they are a lifetime commitment. Be sure and weigh all the pros and cons before purchasing one of these cockatoos as a pet. Visiting local breeder and spending some time with the birds are a good way to find out if you’re really willing to put forth the effort to own one of these high-maintenance birds.

The Major Mitchell cockatoo eats a diet similar to most other cockatoos. Around 60% dry foods, consisting of seeds, nuts or pellets and 40% made up of fresh fruits and vegetables.

Studies have shown that the wild population of the pink cockatoo has decreased, however; unlike many species of cockatoo, the pink cockatoo is not endangered. In fact, it has a status of “least concerned” in regards to its conservation status.

While many cockatoo are only found on certain tropical islands, the pink cockatoo is found on the continent of Australia, and has spread across the continent.

This has likely played a large role in the pink cockatoo not becoming endangered as easily as the species native to islands. Animals that live on islands tend to have small populations to begin with and have nowhere to migrate to since they only live on one small island across an entire planet. Having access to an entire continent has given the pink cockatoo a better chance at survival.