The Western Corella is a species of cockatoo found in Australia. They get their name because they are found in western Australia. For a time, they were commonly confused with similar looking cockatoos such as the Cacatua Tenuirostris (Long-billed Corella) to which they are closely related.

Their scientific name is Cacatua pastinator. 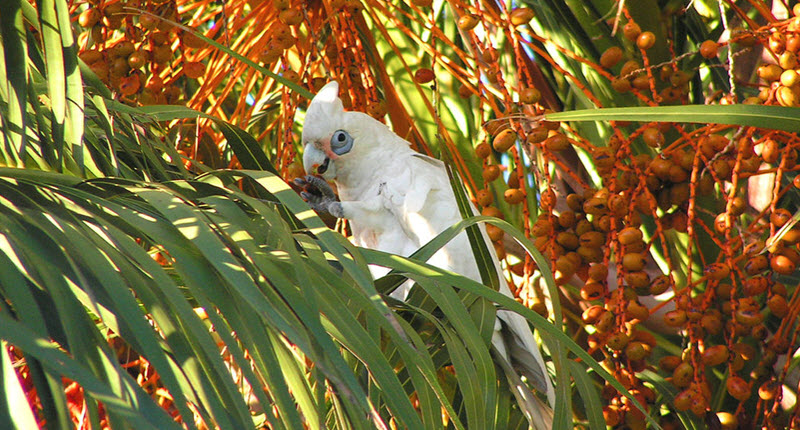 Western Corellas have white feathers with orange plumage near their beak. They have a yellow plumage under their wings and a white crest. Their most noticeable feature is that they lack feathers around their eyes. The “bald spot” around the eye is often a dark gray or blue color. Care should be taken not to confuse these bird with the Bare-eyed Cockatoo, which also has these featherless eye rings.

The Western Corella is a medium sized cockatoo reaching between 17-19 inches by the time they have entered adulthood. They typically weigh between 25-30 oz.

These birds are often seen in large groups in the wild and have become something of an icon in western Australia. They are often seen in large groups, ranging from hundreds to even over a thousand cockatoos in rare cases. While Western Corellas do not migrate from their homes outright, they will travel short distances from their trees to other locations looking for food and water. They are known to make quite a spectacle for filling trees with their white and salmon plumage.

Western Corella tend to be quite social amongst their large groups and can often be heard from great distances away. Despite flying in such large numbers breeding pairs often mate for life.

As with most cockatoos, the Western Corella has a diet consisting mostly of seeds. In addition to seeds they can eat a variety of other foods in moderation, including certain fruits, insect larva and flowers.

In the wild, Western Corella have become infamous for getting their food from the farming industry. They often feed from crops as well as stored food such as from grain silos or from food intended to feed livestock.

Like most cockatoo this species has a long life span. In captivity the Western Corella can live longer than fifty years.

Western Corella are well known for their “romantic” side in regards to breeding. Breeding couples often pair off for life, with “divorce” rates often ranging in quite low percentages. Both partners take part throughout the entire breeding process by building and maintaining the nest together, as well as working as a pair to raise their young. 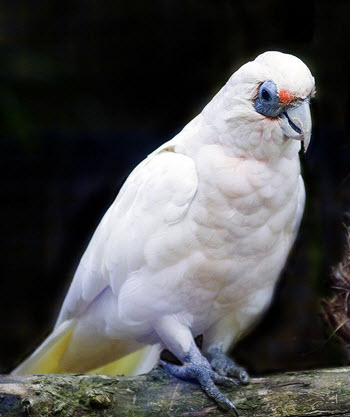 The popular of Western Corella gradually shrunk until the 1940s. After this low point, the species spread out into a wide range, traveling eastward along with the agriculture development that was ever expanding.

While permits are still granted to cull these birds within reason, they have been freed from much of the violent prejudice they received from the agriculture industry in decades past. The species has been on a steady increase for years. Due to their success in recent years, they have been given a conservation status of “least concern.”

Most threats that modern day Western Corella face still relate to the agriculture industry. Shootings and poison have been prohibited but culling may be permitted in certain areas and under extreme circumstances.

Like most cockatoos the Western Corella is a sought after pet due to its beautiful plumage, intelligent mind and ability to mimic human speech.

All cockatoo are social creatures that require a lot of play and affection. Ignoring a cockatoo for extended periods of time can result in destructive behavior.

When well cared for, the Western Corella can be a rewarding pet. Cockatoo often form a strong bond with their owner, and are more open to affection than most birds. They enjoy being held and having their feathers stroked. Due to their long life span owners often form incredible bonds with these creatures.

A Few things to consider before buying a Western Corella

The Western Corella is a bit larger than some cockatoos, although it is still considered “medium” in size it often requires a full sized walk-in enclosure. Walk-in enclosures should be at least fifteen feet in length. This can make them a challenging bird for amateurs, as is the case with all cockatoos.

Many cockatoos are turned back over for adoption within their first few months of being with a new owner. This is because most potential cockatoo owners do not have the money or patience to raise cockatoo. Only well researched and capable individuals should try to keep a Western Corella.