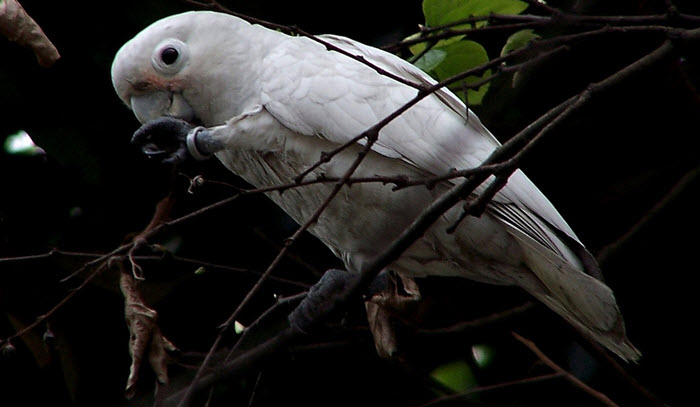 The tanimibar corella is a species of cockatoo sometimes known better as Goffin’s Cockatoo. Its scientific name is Cacatua goffiniana.

It is endemic to islands in Indonesia, specifically the forests of Yamdena, Selaru and Larat. Over time, it has also been introduced into the wild in other locations such as Singapore, Puerto Rico and the Kai Islands.

The Goffin Cockatoo was named by the explorer attributed to discovering the species, Otto Finsch. Rather than naming the bird after himself, he instead elected to the name the bird after his friend Andreas Leopold Goffin, who had died the same year Finsch discovered the new species of cockatoo.

Tanimbar corella is the smallest of the white cockatoos, at 12 inches long and weighing about 10 oz. Like all cockatoos they have a crest on their head. Their feathers are mostly white with hints of salmon. Feathers with a yellow tinge can be found on the underside of the tail and wings. Appearance does not vary much between male and female, or adult and young. 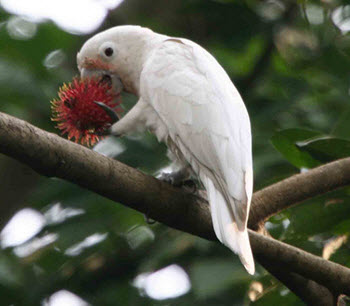 This cockatoo has been found to be quite friendly and curious in nature. They are social creatures that love to play and receive affection from their owners. They enjoy exploring and learning, which can require a watchful eye on behalf of pet owners. It is not uncommon for Goffins to figure out how to open their cages or get into bags and boxes that they were not intended to open.

The diet of the Goffin is not unlike that of most cockatoos. Their diet consists of mostly seeds but can also contain some nuts and fruits.

The lifespan of the Goffin cockatoo is a matter of study and is not yet certain. The longest recorded lifespan of a Goffin in captivity is twenty-six years, but due to the high lifespan of other cockatoos it is believed their lifespan will be found to be much longer as study continues.

There are now more Goffin cockatoos in captivity than there are in the wild. Deforestation and mass trade has hurt their natural ecosystem but thankfully the Goffin breeds well in captivity.

Goffin’s Cockatoo has a conservation status of near-threatened. While this species of cockatoo breeds well in captivity, its overall population has been on a downward slope particularly in the wild. This has been primarily due to the deforestation of their homes.

The bird trade has also contributed heavily to their conservations status, as wild specimens have been gathered at too fast of a rate thus upsetting their ecosystem.

The Goffin cockatoo makes a great pet for owners who are skilled and patient enough to raise them. For those who are not experienced with keeping birds, the Goffin may be too demanding. Many first time bird owners tend to give up their Goffins. This bird requires a lot of one on one attention and a frequent rotation of toys.

A Goffin that is given proper training early in life can sometimes learn to talk but they are typically not the most skilled talkers. These are social birds that like to be held and have their feathers gently stroked.

A Few things to consider before buying a Goffin Cockatoo

The main thing that sets Goffins apart from most cockatoo is their surprisingly high intellect and curiosity. These traits are seen in most cockatoos to be sure; but they are exceptionally high in this bird in particular.

As mentioned before, Goffins are excellent at figuring out doors and latches on their cages, so be wary of this. These birds learn primarily by mimicking behavior as well as trial and error. After watching their owner undue the latch of their cage just once, the Goffin may then use their beak or feet to try to undue the latch themselves until they can figure out the appropriate angles.

Goffins also require plenty of toys and playtime that stimulate their mind. They will get bored of old toys quickly and if left alone for extended periods they will turn to destroying their cages for entertainment.

While Goffins require a lot of one on one time, it should also be understood that they cannot be given what they want on-demand all the time or they will be spoiled and their behavior will worsen. A Goffin that is spoiled with too much non-stop attention early on may turn to screaming for playtime day and night. Goffins should be taught to entertain themselves through toys and puzzles that they can use in their cages.

Cockatoos that are left in boredom for extended periods of time can develop self-destructive behaviors such as ripping out their own features or destroying their surroundings. Potential owners should be ready to invest a great deal of time and money if they want to keep one of these amazing birds.