They are found in the forested areas of southwestern Australia.

They are sometimes confused with Carnaby’s black cockatoo because of the black plumage and white tails. At one time they were considered the same species until they were divided into their own separate species. 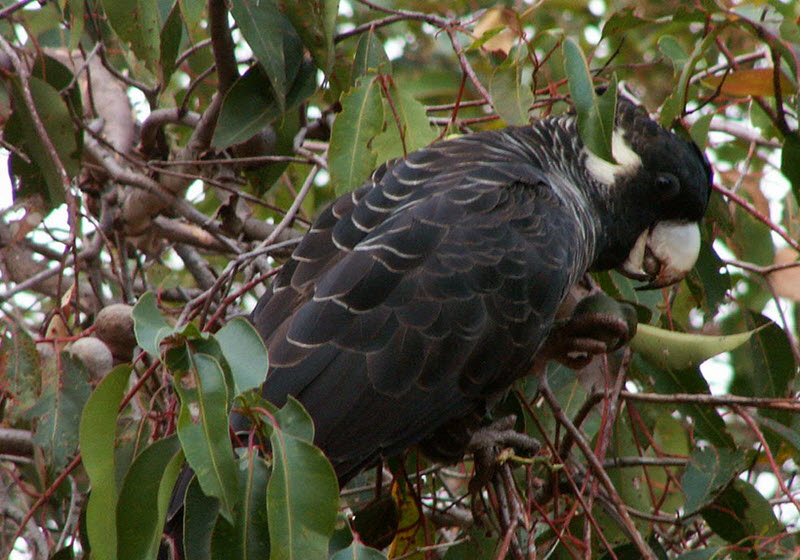 The crest of the Buadin’s black cockatoo is short. The bird is mostly black or dark gray in color except for white patches on its cheeks and a white band on its tail. The tips of the tail feathers are all black.

The adult bird is around twenty-two inches long and weighs one to one and half pounds.

The legs on the bird are a brownish gray.

It has a long and narrow beak. The beak of the male is dark gray and its eye rings are slightly pink. The female has gray eye rings, a bone colored beak and the feathers on its cheeks are lighter than the males.

The call of the male and female is slightly different which sounds almost like a duet when done at the same time. The male’s makes a long “kurweeur” call while the female’s is a shorter “bunypi” call. 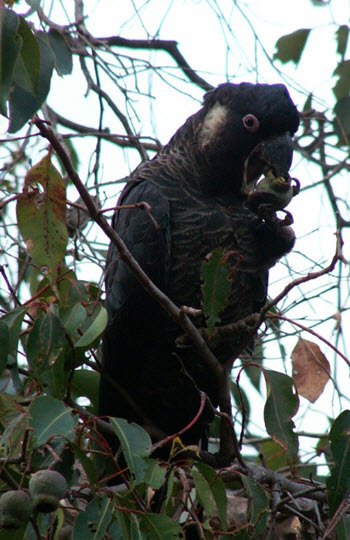 The Baudin’s black cockatoo likes to feed high in the canopy of trees. They eat seeds including those from eucalyptus, banksia and hakea trees. They also eat fruit from apple and pear trees.

It uses its long bill to extract seeds from the nuts of trees such as the Marri tree.

They have also been known to feed on fruit crops which can turn deadly since some farmers will shoot them to save their crops.

These birds can live an average of twenty-five years though a few have been documented to live almost to fifty.

The mating call of these birds is a low “arr” sound followed with a high sounding whistle.

These cockatoo makes nests in hollow trees such as the Karri, Marri or Wandoo. They line the nests with wood chips.

They breed between the month of August and December.

Only one or two eggs is laid in each clutch. If there are two eggs usually only one chick survives. Only the female incubates and cares for the chick.

As with many other cockatoos, development and destruction of natural habitat is an ongoing threat to Baudin’s black cockatoo. They need forests with older, hollowed out trees to make nests and trees that provide food. They also must compete with other cockatoos and even bees for nesting hollows.

Farmers have also been known to shot at these birds to keep them away from their crops which is another danger.

Conservation efforts are in place including the Great Cocky count. Every year since 2009 this annual census is taking to track the population of all the black cockatoos.

They are listed on the endangered species list due to their rapidly declining numbers. It’s estimated that there are currently only 10,000 of these birds remaining.

Because they breed slowly it will be hard for their numbers to increase once they have declined. It is also a concern that of their remaining numbers many are past breeding age.

Because these cockatoos are endangered they are not considered optimal pets. Those that remain of breeding age need to be given the best chance to breed and increase their numbers. The best chance of success is in rescue organizations and conservation sites.

These birds are not usually available outside of Australia. As with other cockatoo’s care should be taken to only buy from reputable sellers who have breed the birds, not birds that have been captured in the wild. Wild birds will not adapt well to being kept in captivity and will not make good pets.

As with other cockatoos, these birds can be loud, especially if left alone for long periods of time. They are not good pets for apartment dwellers.

The cost to purchase the bird is only the beginning. They will need a large cage or aviary, the right diet of pellets and fresh fruit, lots of toys to play with and chew on, and annual trips to an avian veterinarian.

Because they have a long life-span these birds are not a short-term commitment.

If you are sure you have the time and resources to commit to having a cockatoo as a pet; you should consider adopting from a rescue shelter. Many people purchase these birds and then find they do not have enough time to spend with them and no longer want the pet. This results in a large population in shelters.