The gang-gang cockatoo is also known as the red-headed cockatoo, the helmeted cockatoo, and the red-crowned cockatoo. The scientific name is Callocephalon fimbriatum.

These birds are native to south-eastern Australia.

Their appearance is so iconic that they are used on an emblem by the A.C.T. (Australian Capital Territory). 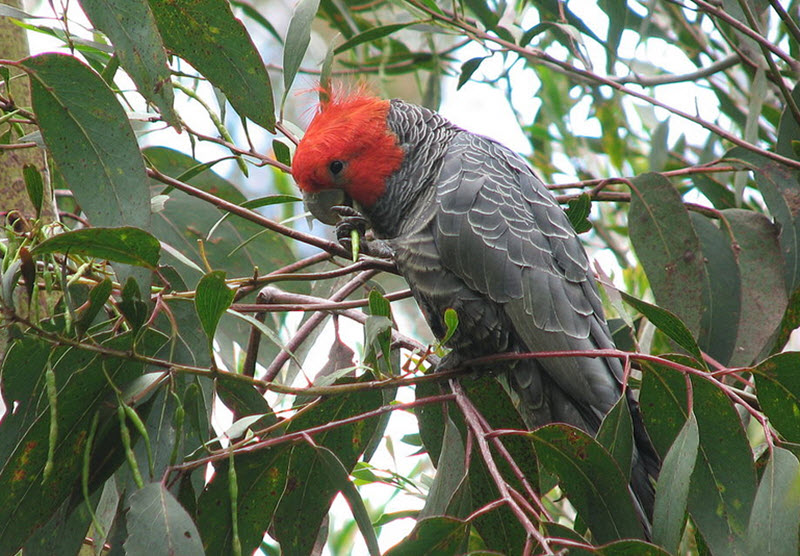 The prominent feature of this bird is the red feathers on its head. Its crest is also red and made of wispy feathers. This is only true of the male of this species, though. It is one of only two cockatoos that has red on its head; the other being Major Mitchell’s cockatoo.

The females do not share this distinctive appearance and their head feathers are gray. The plumage on the body of both male and female is slate gray.

As adults these birds are about fourteen inches long and weigh around eight or nine ounces. They are stocky with a wide wing span and short tail feathers.

They usually stay in family groups in summer but in winter will often flock together as they forage for food. 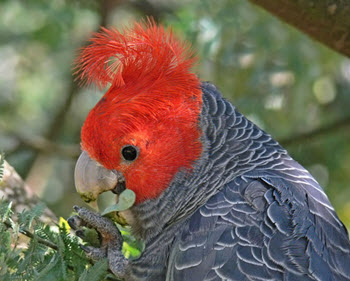 It’s not unusual to see the gang-gang cockatoo in the gardens of the city of Canberra.

In the winter they reside in forests and woodlands and in the summer they move to higher altitudes to dense mountain forests. They seem to prefer cooler temperatures and a wetter climate.

They stay mostly in trees but come down to find water and to forage for nuts and berries on the ground.

Their call has been compared to a creaking gate and they make a growling noise when they eat.

They eat mainly seeds from the eucalyptus and acacias trees as well as some other plant material. They will also eat insects and insect larvae. They are one of the only birds that eat saw fly larvae and will eat an entire group of grubs at one time.

Under optimal conditions the gang-gang cockatoo can live up to fifty years or more.

The gang-gang cockatoos breeds between October and January. Like many other cockatoos they build nests in tall eucalyptus trees and then line the nest with wood chips. Unlike other cockatoos the tree does not have to be hollow. The female will use her strong beak to make a cavity in a live tree.

There are usually two eggs in a clutch and both the male and the female incubate the eggs. The eggs hatch after twenty-five days. Parents feed the chicks in the nest for six to eight weeks.

Destruction of its natural habitat is one of the biggest threats to the Gang-gang cockatoo. They need forests with tall trees to make nests and to find seeds and nuts to eat. When these forests are destroyed for the sake of development it endangers all the birds that need this environment to survive.

To preserve this species it is important that all of the Gang-gang cockatoos of breeding age are allowed to flourish in the wild or are kept in programs that have success with breeding and caring for these birds. In many cases they do not breed well in captivity.

They have not had a good track record as a pet because they get bored easily if they don’t get a lot of attention. When they’re bored they become destructive to property and even to their selves. Extreme feather plucking is a common problem.

A Few things to consider before buying a gang-gang cockatoo

It will be difficult to secure one of these birds as a pet but it is possible in Australia. Outside of Australia the odds are slim that you will be able to find one. If you do, they often cost $2,000 or more. As more are bred and hand-raised in aviaries they may become more available.

They can be an expensive pet because the purchase price is only the beginning. You then need to provide a large cage or aviary, lots of toys for chewing, a varied and healthy diet, plus at least annual trips to an avian veterinarian.

It is important to familiarize yourself with cockatoos before attempting to own one.

They are known for being loud. Their screech is likely to annoy your neighbors if you live in an apartment or condo. Though they are intelligent birds they will usually not learn as many words as a parrot might. They can learn to do tricks if you train them properly.

They can be picky eaters and are almost always messy. They like to sling their food all over.

They love attention and will not do well without lots of it – every day.

Many cockatoos have long life-spans so they are a long-term commitment.

Instead of purchasing a cockatoo, consider adopting one from a bird rescue organization.