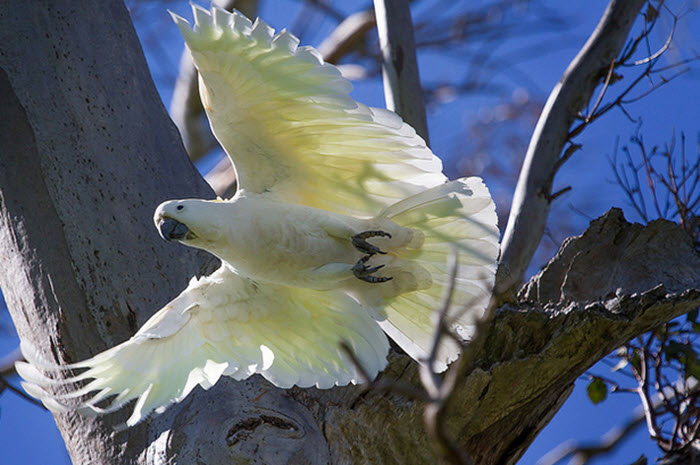 They are native to Australia and are usually found in forested areas and even in urban areas. They can now be found in New Guinea and New Zealand.

The sulphur-crested cockatoo has mostly white plumage except for a slight bit of yellow under its wings and on its distinctive yellow crest. Their beaks are dark grayish black.

Male and female look the same except the male had dark brown eyes and the female has reddish colored eyes. 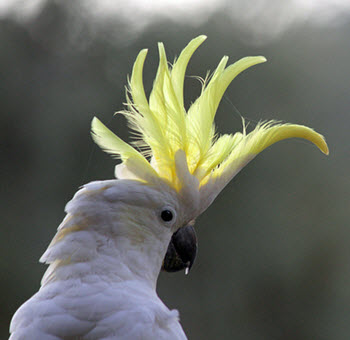 These birds usually travel and feed in flocks with some of the birds seeming to keep watch for danger while others are eating.

They are known for their loud, screeching calls. Like many cockatoos, they are often heard before they are seen. They may also emit a low growl if they feel they are in danger.

They stay in the same area year-round and do not migrate due to weather.

The birds are considered pests in urban areas because they chew on siding and decking causing extensive damage.

The sulphur-crested cockatoo eats a varied diet of seeds, nuts, and berries.

These birds have been known to live up to eighty years in captivity with the proper care and a healthy diet.

Nests are built in the cavities of old trees and wood chips are used to line the nest.

Both parents incubate the eggs and care for the chicks. There are usually one to three eggs in each clutch and they hatch after thirty days. The chicks remain in the nest for approximately sixty-five days.

Family members will often stay together even after the chicks are adults.

These birds are not currently on any endangered lists. They suffer from the same plight of many cockatoos regarding the loss of their natural habitat due to development. When forested areas are cleared it’s hard for them to find aged trees to nest in and enough food to eat.

The sulphur-crested cockatoo is a loving and affectionate bird and considered a good choice for a pet. They are intelligent and with the proper training can be taught many tricks.

However, due to their affectionate nature they need a lot of attention. They are only suited for owners who have a lot of time to devote to them every day. They require at least two or three hours of attention from their owner outside of their cage. Without proper attention, they will become destructive, even to themselves. This includes plucking their own feathers.

They are extremely loud birds and are best suited for single family homes where they won’t disturb nearby neighbors.

These birds need plenty of exercise outside their cage. They are better suited to aviaries whenever possible.

A Few things to consider before buying a sulphur-crested cockatoo

A suphur-crested cockatoo has a long life-span, up to eighty years, so they are not a short-term commitment. You’ll need to have someone else lined up who can take care of your bird if you are ever sick or out of town.

Be sure you have enough time and resources to devote to owning one of these birds as a pet.

These birds can usually be purchased for prices ranging from $1,000 to $2,000. Along with the initial purchase price you’ll need to provide a large cage or aviary, a proper diet of pellets and fresh fruits and veggies, plenty of chew toys, and at least annual visits to an avian veterinarian.

A varied and healthy diet is vital since these birds will quickly suffer problems if they don’t have an adequate diet. Nuts and seeds should be kept to occasional treats.

Cockatoos should never be fed avocados, chocolate, onions, garlic, or fruit seeds. All of which are toxic to these birds.

Never keep your bird’s cage in the kitchen since fumes from Teflon pans are toxic to them.

Their cages should never be placed in areas where there is a draft from outside or indoor air vents.

Because of the attention the sulfur-crested cockatoo requires they are not recommended for inexperienced bird owners. If you decide to purchase this bird, do plenty of research in advance and talk to other owners.

Always consider adopting a bird from a rescue organization. Many owners find they don’t have the time or diligence to take care of cockatoos and many end up in rescues within the first year.