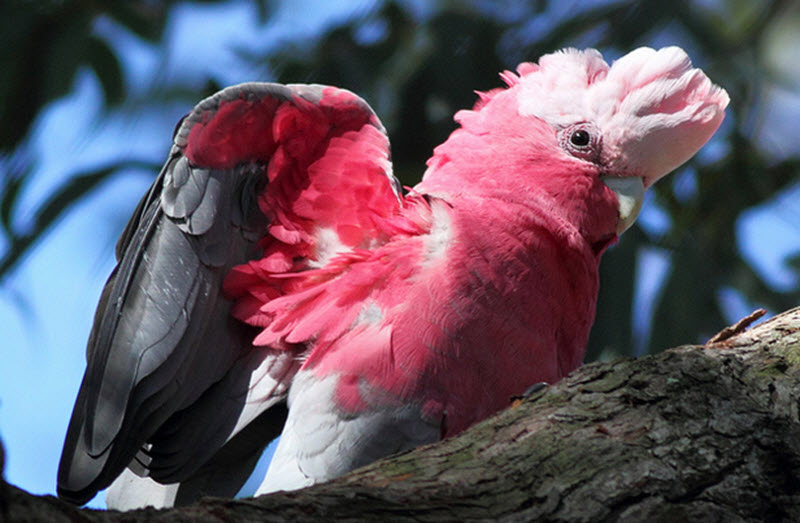 The galah is also known by the names roseate cockatoo and rose-breasted cockatoo. The scientific name is Eolophus roseicapilla. They are wide-spread throughout Australia and New Zealand. They have also been brought to Tasmania where they now rival Major Mitchell’s cockatoo in numbers. 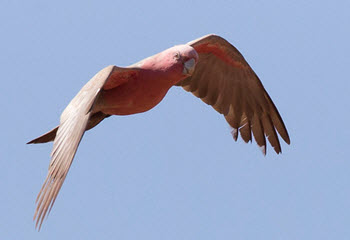 The galah has a pale gray back, gray wings, a pink face and chest, and a small pale pink crest. They raise their crests when alarmed or sometimes when looking for a mate. The crest is not visible when they are relaxed.

Their beaks are light colored as are their legs.

Adults are around fourteen inches long and weigh less than a pound. Females are usually slightly smaller than males. This makes them one of the smaller birds in the cockatoo family.

Males have dark brown eyes but female have lighter brown or red irises.

Galahs travel in flocks and will often forage for food in large grassy areas. Unlike many other cockatoos they do not live in forests. They usually live near water.

They are considered pests by many farmers since they graze on agricultural fields and destroy crops.

Their screech is a loud, high pitched “chi-chi”.

They are fast and agile flyers.

In the wild galahs eat fruits, nuts and seeds. They will also eat corn from farmland.

In captivity they can be fed pellets but their diet also needs fresh vegetables and fruits for variety. They need branches and leaves for chewing.

Because they are prone to fat tumors they need a low fat diet and lots of exercise.

In their natural habitat galahs only live to around twenty years old. When kept in captivity they can live as long as eighty years if they are cared for properly and receive the right diet. 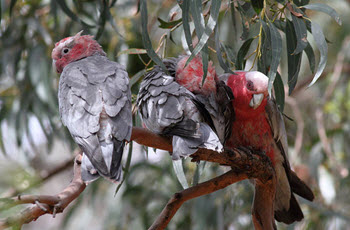 Tree Galah in a eucalyptus tree – Picture by Frankzed

Galahs build nests in the hollows of trees much like other cockatoos. During mating season they sometimes hang from trees and squawk loudly for long periods of time.

They usually lay two to five eggs. Both parents stay with the eggs while they incubate. Incubation takes twenty-five days before the eggs hatch.

Chicks leave the nest around fifty days after hatching.

They usually mate for life but if their partner dies they will take another.

Sometimes they breed with other species of cockatoos such as the Sulphur-crested Cockatoo.

The Galah is not on any endangered species list. Like other wildlife, the biggest threat is development that wipes out its natural habitat. Galahs are now sometimes seen in more urban areas. This is partly due to pet birds being released into the wild when their owners get tired of caring for them.

Due to its outgoing and friendly personality the galah is popular as a pet. They are sociable birds and enjoy interacting with humans; however, they are not as cuddly as some cockatoos.

They can also be taught to talk when trained consistently. They are loud so they may not make the best pets for someone in an apartment or condo with close neighbors.

Their smaller size also makes them popular pets as they do not require as large a cage or aviary as larger cockatoos.

They are smart and can be trained to do many tricks.

A Few things to consider before buying a Galah

Always buy from a reputable dealer. You want a bird that was hand raised in an aviary. Never purchase or capture a bird from the wild. They will revert to their wild behavior and will not make a good pet.

The galah is an avid chewer so you’ll need to provide an assortment of toys. They are known for being hyperactive so you must spend some time with them out of their cage every day. Otherwise, they’ll get bored and can become destructive to themselves. You’ll need to have plenty of time to socialize with and train your bird.

When they eat they throw food all over creating a big mess.

Because they are prone to fatty tumors they need lots of exercise. Clipping their wings is not recommended because of this situation.

A bite from a galah can be fierce so spend lots of time hand training your bird when it’s young and learn to understand your galah’s body language. It will let you know when it’s unhappy or agitated.

As they reach maturity the male can become more aggressive.

Be sure you have a plan for the care of your bird when you are out of town.

A galah can live up to fifty or more years in captivity so make sure you’re willing to make a long-term commitment.

Be sure your budget is adequate to allow not only for the purchase of the bird, but also for food, toys, cage or aviary, and visits to an avian veterinarian at least once a year.