The red-tailed black cockatoo is also known as the Banksian black cockatoo, Bank’s black cockatoo and the great-billed cockatoo. The scientific name is Calyptorhynchus banksii. They can fluff up their feathers and conceal their beak earning them the name “bank’s hidden beak”.

They are native to Australia. The Tiwi people, in their folklore, believe that the red-tailed black cockatoo lead the dead to heaven.

There are five sub-species of this bird and they can be found in most parts of the country, even in some urban areas.

Its closest relative is the glossy black cockatoo. 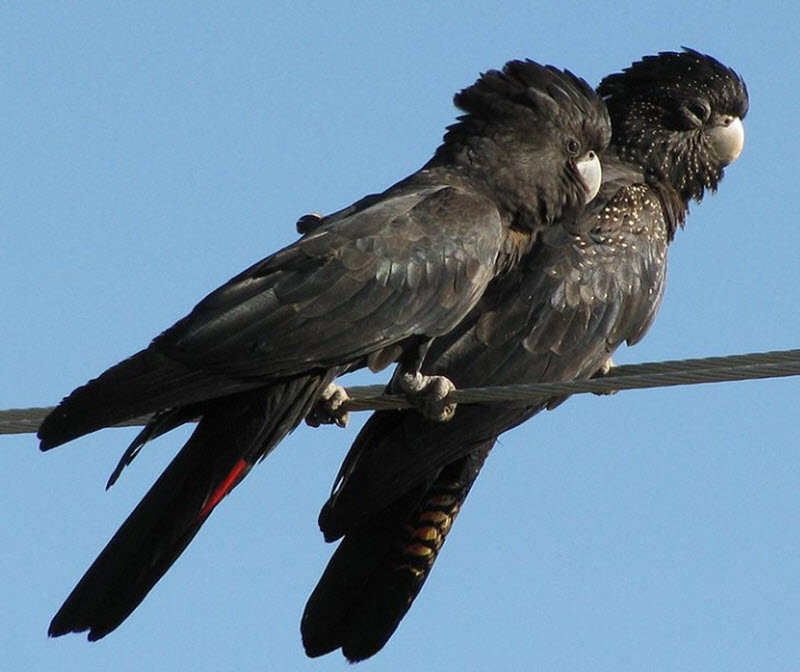 The red-tailed black cockatoo is sexually dimorphic which means the male and female have differences in their appearance. Both male and female have black plumage but the males have red tail feathers – thus their name. The male’s plumage is a glossy black while the female’s is duller. They both have a black crest that they raise when they are threatened or agitated.

The females do not have red tail feathers but they do have spots of yellow on their wings, neck and head.

Both male and female have dark brown eyes and brown legs. The female has an off-white beak and the male’s beak is dark gray.

Adults are around twenty-three inches long and weigh twenty-four to thirty ounces making them one of the larger of the cockatoos. Females are slightly smaller than males. 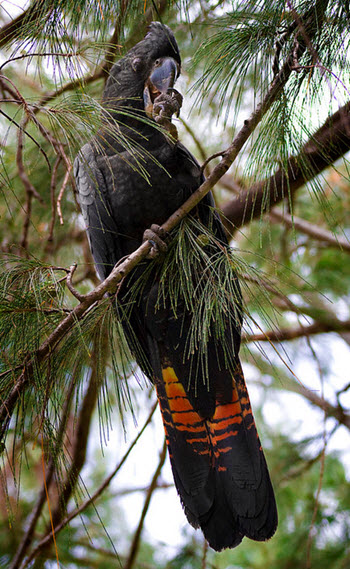 The red-tailed cockatoo often travels in large flocks. They sometimes travel with the yellow-tailed black cockatoo.

They spend their days foraging for food and then return to their nests in the evening.

These birds have a loud screech, almost like a trumpet, when they are flying. When alarmed they make a low growling noise.

The red-tailed black cockatoo eats a diet consisting largely of seeds from Eucalyptus trees. They also eat fruits and nuts from other trees including the casuarinas and banksias. They also eat insects and insect larvae.

Their powerful beaks can crack brazil nuts and even coconuts. They can hold seeds with their claws due to having two toes facing forward and two backwards. They then use their muscular tongue to remove seeds from their shells.

Because they can destroy crops they are considered pests by farmers.

These birds can live fifty years or more in captivity with the optimal diet and care. In the wild they usually live only twenty years.

The male red tailed black cockatoo attracts the female by strutting along trees branches and bowing to her.

Like many cockatoos, they build nests in the hollows of tall eucalyptus trees, often near water on the banks of rivers. They line the nest by chipping away at the interior of the nest until the floor is covered with wood chips.

Only one egg is laid in a clutch. The female incubates the egg while the male brings her food.

Once the egg hatches, both the male and female feed the chick by putting regurgitated seeds into its beak. The chick fledges at ten to twelve weeks but stays with its parents for a much longer time.

These birds reach maturity at around four years old.

Development that destroys forested land, the natural habitat of these birds, is one of the biggest threats to their survival. They need forests as a source of food and aged trees for nesting.

This bird is part of the Great Cocky Count which started in 2009 and tracks the population of black cockatoos in Australia.

Illegal poaching is also a threat to these birds.

Efforts are being made to protect endangered birds by planting more trees and protecting their natural habitat from further destruction. This will assure they have nesting trees in the future as well as trees to provide seeds for their food supply.

The red-tailed cockatoo tends to do very well when raised in aviaries. However, they are hard to find outside of Australia and if you do find one it will be expensive.

When you purchase any species of cockatoo be sure you’re buying from a reputable dealer. Do not purchase a bird that has been illegally captured in the wild. It will not adapt well to life in captivity and will not make a good pet.

Cockatoos are loud birds and the red-tailed black cockatoo is no exception. They do better in single family homes where neighbors cannot be disturbed by their loud screeching.

Besides the initial cost of the bird you need to be prepared to purchase a large cage or aviary, lots of toys for the bird to chew on and play with, a healthy diet of pellets as well as fresh fruits and veggies, and annual trips to an avian veterinarian.

This cockatoo can live fifty years in captivity so you need to be sure you’re willing to make a long term commitment for this pet.