Solomon’s cockatoos are native to the Solomon Island, thus their name. They are also found on a few islands in New Guinea.

Their other names include: Ducorp’s cockatoo or the broad-breasted corella. The scientific names is Cacatua ducorpsii. 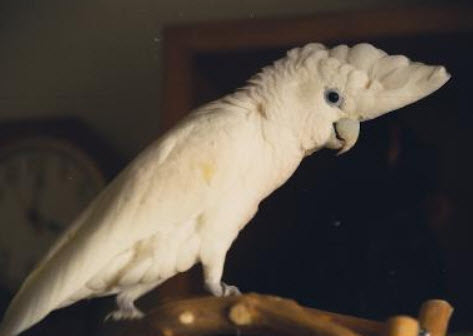 They are mostly white except for some yellow under the wings and tail and a blue ring around the eyes. Their crest is small and is slightly pink in color.

Both the feet and beak are a bone color.

Eyes of the adult male are brown and the females are reddish brown but this is not always accurate. Sexing of the birds by a DNA test is the best way to identify gender.

They are similar in appearance to the Goffin cockatoo.

Their screech is loud and sounds similar to the little corella.

They travel in large flocks and can be quite bold.

These birds eat seeds and nuts. They will also feed on crops in fields making them a pest to farmers. In urban areas they’re known for feeding in parks and gardens.

These birds can live up to fifty years or more.

The Solomon’s cockatoos normally breed from July to September. They build nests in the empty hollows of trees and line the nest with wood shavings.

Eggs will incubate for twenty-four to twenty-six days before hatching. Birds will leave the nest after sixty-two days.

Solomon’s cockatoos are abundant and listed as least concern by the International Union of for Conservation of Nature.

The Solomon cockatoo is not as outgoing as most cockatoos. It is wary and shy so is not as common a pet as other species of cockatoos. They are highly intelligent and easy to train. They can be taught to say a few words and do tricks.

If you do choose to have one as a pet it’s important to handle them often when they’re young and expose them to many different situations. These include having them around other people and regular trips to the vet. But do not overwhelm them with too many people or too much noise at one time.

They need to have time to fly outside of their cage each day. If possible, providing an outside cage, as well as indoor, is optimal so your bird can enjoy sun and fresh air.

They are considered adept escape artists so make sure the cage you place them in is secure.

Like other cockatoos, these birds will notice and pick up any small items left lying around. This can be toxic to your bird. Make sure to keep the rooms where your bird flies cleared of small items such as screws, small toys, and jewelry.

A Few things to consider before buying a Solomon’s Cockatoo

You’ll need to be sure you can budget for all the expenses of this pet. These birds usually cost over $1,500.

After the initial cost of the bird you’ll also need to purchase the correct pellets and a large cage, plenty of chew toys and annual visits to an avian veterinarian.

Because these are active birds you’ll want to provide the largest cage you can afford. Never place the cage near windows or doors where the bird will feel drafts. Do not place the bird in the kitchen since some smells, such as the fumes from Teflon pans, are toxic to many cockatoos and parrots.

Whenever possible have your bird checked by an avian vet before purchase to assure it’s healthy.

Your Solomon’s cockatoo will need a diet that includes 50% pellets and 50% fresh fruits and vegetables. If there is usually food left over start feeding your bird less at one time. Over feeding will result in your bird slinging the extra food around and making an even bigger mess than normal.

Never feed your cockatoo chocolate or avocado which are both toxic to many birds.

Though these birds are not as loud as some larger cockatoos, they still have an intense screech that can be bothersome to neighbors. They are best suited to living a single dwelling home.

Like other cockatoos; the solomon’s cockatoo is a powder down bird. This means they aren’t a good pet for homes where someone suffers from allergies or asthma.

Males can become aggressive as they reach adulthood.

Remember that this bird has a long life span so this is not a short-term commitment.

Before buying a cockatoo, consider adopting one from a rescue organization. Many people find they are not suited to having one of these birds as a pet so many end up in rescues.