They are native to Australia but found mostly in the southeastern region. They are also spotted in urban areas such as Perth and Sydney. This is due mainly to pets birds being released or escaping into the wild.

The long-billed corella have beaks that are white, pointed, long and slender – thus their name. Unlike many cockatoos, their crest is very small, almost indiscernible.

As adults they are approximately sixteen inches tall and weigh around one and a half pounds. They are stocky and have a short tail.

Their feathers are mostly white except for their face and forehead which are pink. They usually have some yellow on the underside of their wings and on their tail feathers.

They have grey legs, an eye ring that is blue, and the iris of their eyes is dark brown.

There is no difference in appearance between the male and female so DNA testing is needed to sex the birds.

The long- billed corella is usually found in woodlands, plains, farmland, and urban parks. They usually travel in large flocks with sometimes as many as 2,000 birds.

They are considered pests by many farmers due to their ability to cause great damage to fields of crops. They have also been known to destroy asphalt roads and wreak havoc on golf courses.

They have a high pitched call and like most cockatoos, their screech is loud. 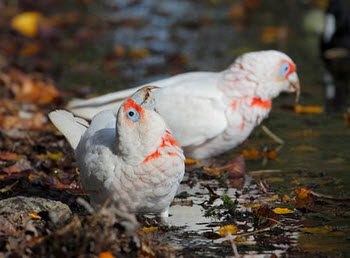 These birds use their long beaks to dig for roots, bulbs, and the weeds from onion grass. They also eat sunflower seeds.

They often forage on the ground in large flocks.

The long-billed corella can live to be fifty to sixty years old in captivity and with optimal care and diet.

The long-billed corella reaches maturity at three to five years.

They breed between the months of July and November. Nests are made in the hollows of trees or in holes in rock cliffs. Clutch size is from one to four eggs and the eggs are incubated for twenty-four days before hatching.

Their nests are built high up in Eucalyptus trees and close to water. Nests are lined with wood chips.

Both parents incubate the eggs and feed and care for the chicks. Nesting time is around fifty-six day and both male and female stay close during this time.

They are monogamous pairs who breed for life.

Clearing of its native habitat is currently the worst threat to the long-billed corella but they are not on any endangered species lists. At one time farmers were known to poison the birds due to fact they destroyed large fields of crops.

The long-billed corella has become a popular pet in Australia. They are not found as often in Britain or the United States mainly due to availability.

Its ability to learn to talk or mimic sounds is better than many other cockatoos.

They are friendly and out-going pets but they need lots of attention. They like to chew so make sure they have plenty of toys. They are not as destructive as some cockatoos but the can be if they get bored.

Like other cockatoos, these are not the best pets for families with small children. They can become aggressive, especially the males at mating age.

They need a varied diet including fresh fruits and veggies as well as seed and pellets.

A Few things to consider before buying a long-billed corella

Cockatoos can make affectionate pets but they are also needy. You need to commit to spending at least a couple of hours each day with your bird out of its cage.

They are best suited to single dwelling houses as opposed to apartments or condos because they can be noisy.

These birds have a long life span of possibly fifty years or more so this is not a short term commitment.

Will you have to monetary resources to provide the bird with toys, cage, food, and medical care?

Who will take care of the bird when you are out of town on vacation?

Before purchasing any exotic birds consider adopting a bird from a rescue organization. Many people take on the task of raising a cockatoo and then realize they don’t have the time or money for the long-term commitment.

The long billed corella is hard to find outside of its native Australia so it is not wide spread as a pet.